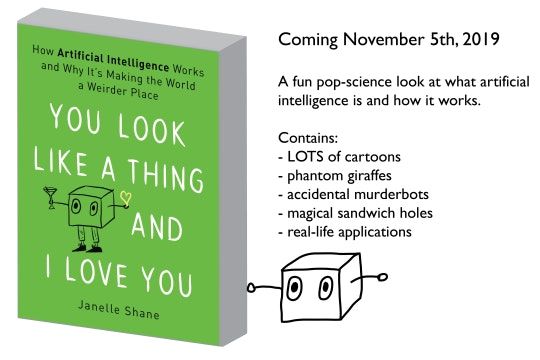 I am really really excited to announce a thing I’ve been working on for more than a year now: there’s going to be an AI Weirdness book!!!!!

You can preorder it at these links:

When I was coming up with a title, I decided to see if I could get a neural network to help me out. Since they learn to generate text by following examples, my first task was to collect a bunch of book titles for the neural net to learn from. Of course, there haven’t been that many cartoon-filled AI humor books published, so I had to resort to other kinds of books.

Starting with a version of textgenrnn that I trained on Welcome to Night Vale transcripts, I then trained it on the full text of my book - that would give it a starting vocabulary that was an uncanny version of my book. But that version of the algorithm was generating paragraphs, not snappy titles, so I trained it for just a bit on another dataset I had handy - ice cream flavors. Here are the titles it generated.

Although delicious, the titles weren’t quite as computer-focused as I would like. I took that same confused Night-Vale-AI-ice-cream neural network and trained on a list of computer algorithms.

They tended to be either very wordy or very obscure - I’m not sure what I was expecting from algorithm names as titles. So I decided to take my cue from science fiction titles. I filtered a big set of titles from http://www.isfdb.org/ for length (so I wouldn’t end up with unwieldy suggestions thanks to titles like “The Philosophical Voyager in a Land Unknown to the Inhabitants of the Earth” and “Captain Megaloman and His Trusty Sidekick Squidley Save the World Once Again”, and then trained the neural net on these.

None of these titles had anything to do with humor, or artificial intelligence, or any of the things the book was actually about. So I started over with the ice cream neural net (I had to start somewhere, and I was hungry) and this time I filtered the scifi titles for length AND for a bunch of keywords like machine, robot, artificial, etc. Finally I was getting a bit closer.

But my book also talks about times when AI is NOT that helpful, times when it makes mistakes or solves the wrong problem, sometimes with serious consequences. I did get some generated titles that struck more of a scary note.

The Doom of Humans
Get the Human
Strange Murder Machine
The Book of the Skin’s Home!
Hello, The Hole of Night
The God and Oh, It’s Humans
The Million Murders Book
The Blood Robot

These titles are needlessly scary, though. Another point of my book is that AI isn’t smart enough to come up with goals of world domination - it’s got the approximate brainpower of a worm. There were some titles that definitely brought out that aspect of the neural net.

The Book of Thinks
The Human Found and Four in Room!
The Artificial Lives, I really on the Jokes
The Very Say Chairs
Everything Moon!
Still We Book of the Dave
Robot Bookbook of Dog Machine

But another aspect of AI is that it can be delightfully, unpredictably weird. It can bring in all sorts of new connections that humans would never have thought of. My book’s a celebration of that weirdness. There were some titles that were indeed weird.

Horses of Pants
Spoon: Vampire of the Book
Handway Wormsels!
Hello, Go Hover
My Face of Monsters
The Fighty Earthquake
The Pig-Book of the Stars
The World Human Shovel!
By My Bunned Rocks
Get Melted
Zom!
The Book of Pies
High McDangs!

And of course there were the titles that were basically repulsive. Those were fitting, too. Today’s AI doesn’t have a sense of appropriateness or morality - it will accidentally do Very Unfortunate things because it has no clue there’s a problem.

So, did I end up using a neural net-generated title for my book? Yes, I did! You Look Like a Thing and I Love You is definitely the fault of a neural net. But it wasn’t generated by the neural net I trained on book titles after all. Instead, longtime blog readers may recognize this title from a different neural net: one trained on pickup lines.

I hope you all will have as much fun reading my book as I did writing it! There will be hilarious experiments, real-world examples, and illuminating cartoons. And yes, there will be plenty of giraffes.

You can preorder it here (preorders are super super helpful for letting stores and my publisher know that people are excited about the book, which helps it do well. If you’re planning to order it anyways, a preorder would be an awesome way to do it).

Preorder You Look Like a Thing and I Love You!
Amazon - Barnes & Noble - Indiebound - Powell’s - Tattered Cover

AI Weirdness supporters get bonus material this week: a bunch more rejected titles, including some that were Even Worse than the earlier rejected titles. Like, unprintably worse. Ah, neural nets.

Bonus: There can be only one