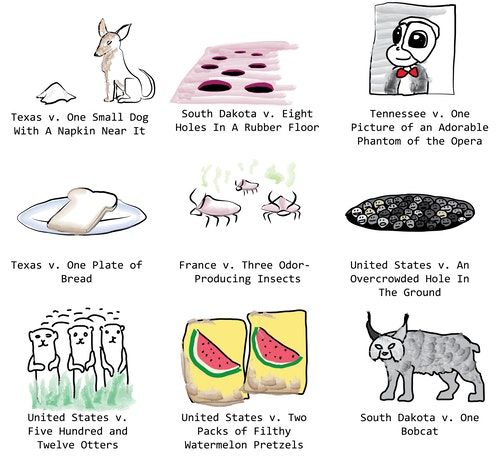 In the course of running a blog where I train neural nets to imitate human things, I have the fun of sometimes being introduced to things that I didn’t know very much about. Like knitting. Or crochet. Or the common names of mushrooms. Or the names of high school robot teams.

Blog reader Clark S introduced me to a new area: that of in rem jurisdiction cases.

What are these? One of the quirks of the US legal system is that in certain cases the court will set up a case against inanimate objects - something to do with the process of seizing contraband or dangerous goods. I still don’t really understand it. But the court cases are called in rem jurisdiction cases, and they end up sounding oddly like they’re asking which would win in a fight. Some of the strangest have included:

Those are the real ones. The REAL ONES.

What would they be like when imitated by a neural net?

I used a neural net called GPT-2, which learned from millions of web pages. When I gave it the list above and asked it to add to the list (via talktotransformer.com), it tried to pick similar kinds of words and phrases, but didn’t know what things are likely to be seized by the US government.

There would be a story behind these, for sure.

These next few would probably fall under the Dangerous Goods category. Or maybe the Perfectly Normal Goods if Everything on the Internet is Real category. (As far as the neural net knows, everything on the internet IS real, because the internet training data is all it knows exists.) I did not try to illustrate them because, well

For more court cases, including some that make it sound like South Dakota has decided to repeatedly fight ducks, become an AI Weirdness supporter to get bonus content! Or become a free subscriber to get new AI Weirdness posts in your inbox.

My book on AI is out, and, you can now get it any of these several ways! Amazon - Barnes & Noble - Indiebound - Tattered Cover - Powell’s - Boulder Bookstore (has signed copies!)