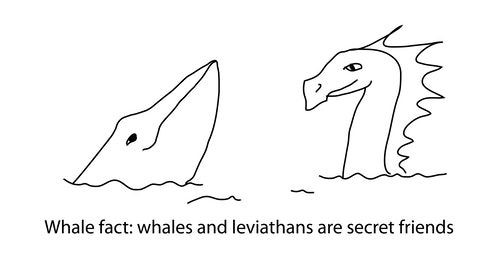 When a neural net can imitate just about any kind of text on the internet, the challenge is to tell it precisely what to imitate. In my last preview of OpenAI’s new API, I asked it some pretty basic questions about horses, and it often got them wrong.

But part of the problem seemed to be that it thought I was asking for jokes. Once it finished answering the horse question, it would sometimes add questions of its own, such as:

Q: Why is the sky blue?
A: Because blue is the only color the sun trusts.

Sure enough, if I prompted it with FAKE whale facts from the @awhalefact twitter account, it responded with more fake facts (even copying the informal grammar):

Is there a way I can prompt this neural net such that I get Serious Answers Only? Since its task is to predict the text that is the most likely to come next, I tried ask it to add to an existing list of eight true facts about whales. At a temperature of 0.9 (enough for some variety, hopefully not enough for chaos) and allowing it to pick what it deemed the most likely of 10 tries, here’s one of its lists of facts. (I’ve annotated its “facts” as true or false.)

So it produces a mix of true facts and true-sounding made-up facts. Its fact about the smallest whale is technically just one character off from the truth (the smallest whale measures up to 9 feet long), so by its standards it’s almost correct. A Buzzfeed listsicle type of prompt (“10 amazing facts you didn’t know about whales!”) produced also produced plenty of false facts.

I decided to try another tactic, and fed it the first sentences of the Wikipedia article on whales.

Whales are a widely distributed and diverse group of fully aquatic placental marine mammals. They are an informal grouping within the infraorder Cetacea, usually excluding dolphins and porpoises. Whales, dolphins and porpoises belong to the order Cetartiodactyla, which consists of even-toed ungulates. Their closest living relatives are the hippopotamuses, having diverged about 40 million years ago.

Although whales were historically thought to have descended from mesonychids, their closest living relatives are now thought to be hippopotamuses.
Megaptera novaeangliae, or the humpback whale, is a species of baleen whale. One of the largest rorqual species, adults range in length from 12–16 m and weigh about 36,000 kg. The humpback has a distinctive body shape, with long pectoral fins and a knobbly head. It is known for breaching and other distinctive surface behaviors, making it popular with whale watchers. Its diet consists mostly of krill and small fish, though it may also eat plankton, squid, and copepods. Like all large whales, the humpback was a target for the whaling industry, and once numbering in the tens of thousands, the worldwide population fell to an estimated 5,000.
Orcas, also known as killer whales, are large dolphins belonging to the oceanic dolphin family, which includes the other large whales, the pilot whales and sperm whales. Orcas are highly social; some populations are composed of matrilineal family groups which are the most stable of any animal species. Their sophisticated hunting techniques and vocal behaviors, which are often specific to a particular group and passed across generations, have been described as manifestations of culture.

I’m not bothering to fact-check each sentence, because it’s basically 100% correct every single time.

But then I started googling individual sentences. It turns out most of them are near word-for-word reproductions of Wikipedia sentences. If the AI were a student, it would be flunked for plagiarism.

It makes sense that an internet-scraping AI would be able to quote Wikipedia text - those sentences really get around. The sentence that starts “Orcas are highly social” is no longer on Wikipedia but seems to have been part of the orca article around 2008, and appears on the internet in 122 places, including in a Twilight fanfic.

To get ORIGINAL facts, I decided to write a few sentences of original fact-filled text about whale evolution.

“Whales are a relatively young group of mammals, having evolved from land-dwelling creatures about 50 million years ago. Their terrestrial ancestors were small raccoon-sized hoofed mammals, carnivorous like other ungulates of the time. Over an astonishingly quick period of time (15 million years at most, possibly less than 5 million), these land mammals made the transition to an aquatic lifestyle, gaining at first denser bones and an ear structure that allowed them to hear more easily underwater. Soon they began to look more crocodilian, their eyes migrating to the tops of their heads. ”

Whales, and especially baleen whales, are well known for their enormous size, but most types of whales are not larger than a full-grown adult human. Exceptions include the blue whale, the largest animal ever known, the extinct “Basilosaurus”, which was longer than a blue whale and likely the largest animal to have ever existed, and the “shovelnose” whales, especially the genus “Balaenoptera” which include the blue whale, “B. musculus”, the fin whale, “B. physalus”, and the sei whale, “B. borealis”.

This reads well but is frequently wrong. Most types of whales are CONSIDERABLY larger than a full-grown adult human. Basilosaurus was not longer than a blue whale. There is no such thing as a shovelnose whale. Would that there were.

To this AI, SOUNDING correct is more important than actually BEING correct.

What about other styles of delivering true facts? (Below, my prompt is in bold, and the rest is unedited AI)

I experimented with a few other ways of generating questionable whale facts, and AI Weirdness supporters can get them as bonus content! Or become a free subscriber to get new AI Weirdness posts in your inbox.