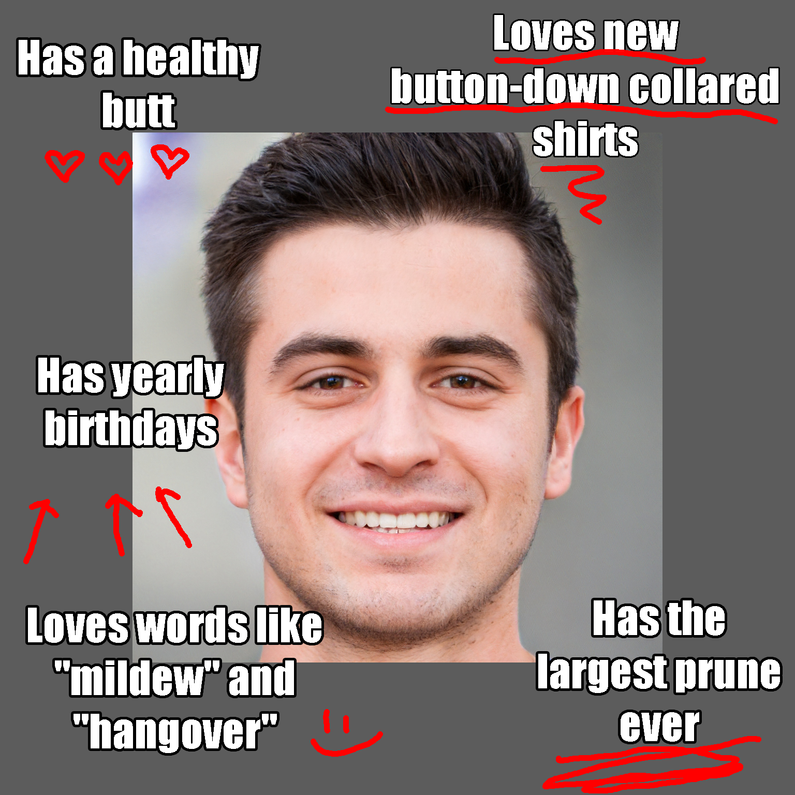 There's this dating show called The Bachelorette, and they've revealed their new guys for the 2021 season! And I get it, in the promo graphics they have very little space to get into the nuances of a personality, but it has been pointed out that their fun facts are rather basic.

The neural net GPT-3 has seen a lot of dating profiles during its internet training. But has it seen this specific variety of astonishingly pedestrian dating profile?

I collected the fun facts from the contestants above and gave them to the largest GPT-3 variant, DaVinci, and it was almost too good at adding to the list:

Likes to revisit the classics
Believes in leaving false modesty at the door
Keeps his nails and hair trimmed
Dreams of buying a small island
Believes that being successful comes down to hard work and practice
Wants a house and mother for his future family
Loves pumpkin lattes
Love, love loves champagne
Believes in destiny
Is a self described daredevil
Loves his blue sleeping mask
Collects souvenir spoons
Always wears a scarf in the wintertime
Always picks mint gum or spearmint flavored gum
Will not touch fish or spicy food
Refers to himself as super romantic

GPT-3's aim is to copy humans, so it's no wonder that it's good at being cliche.

Although DaVinci did come up with a few fun facts that might give the Bachelorette some pause:

(AI-generated image from StyleGan2 via thispersondoesnotexist.com)

Had his housekey modded
Claims to have ridden in a dolphin van
Being good with his hands (He plasters, flicks house lights on and off…)
Says “You’re welcome” when leaving a room

The best fun facts, however, were generated by the smallest GPT-3 variant. Now, Ada did manage to follow my prompt's lead and generate some pretty basic traits.

But some were perhaps more intriguing than existing Bachelorette contestant facts.

Then there's the more... exuberant

Loves to calisthenic
Typically spends after-work flexing around Studio City
Claims to be "the greatest stripper"
He's a star in sheets "The king of paper airplanes"
Dances to hit, just can't get out of his mind till he finally screams it out in a loud blast

Or the just plain enigmatic.

I collected a few more Fun Facts from Ada, which you can read as bonus material if you become an AI Weirdness supporter. Or you can become a free subscriber to get new AI Weirdness posts in your inbox!

Bonus: do YOU like getting lured from the ocean? Maybe you've met your match!