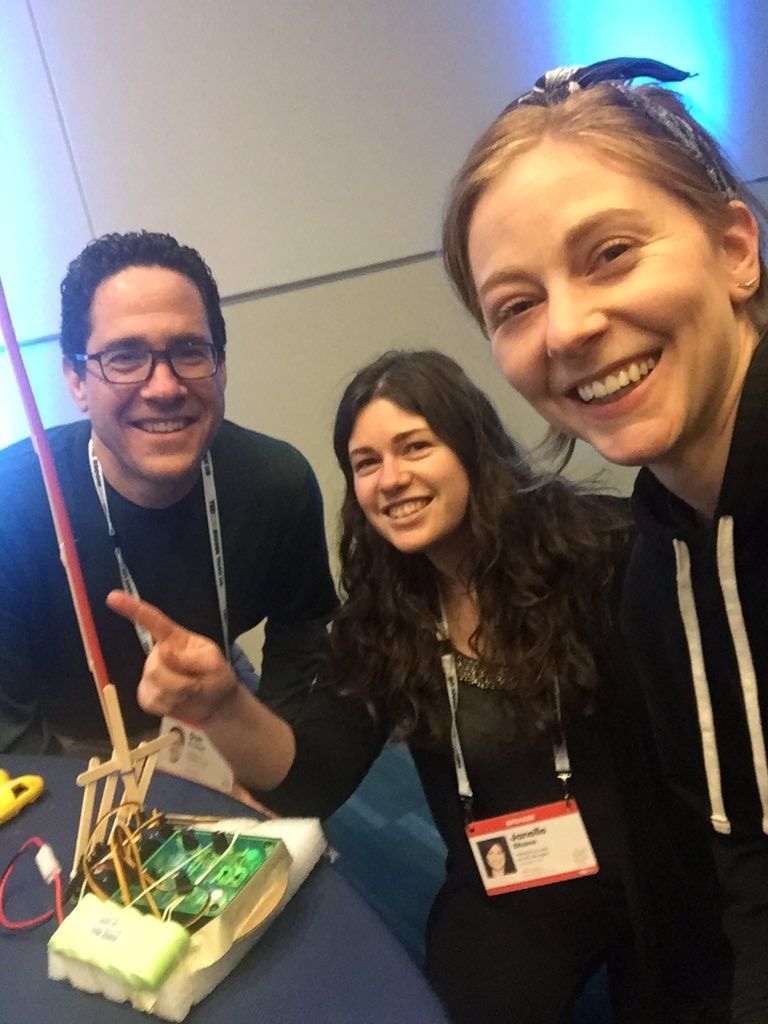 So last week I was a biiiit busy, traveling to Vancouver to give a TED talk(!!!!). I’ll post the talk when it goes live online, probably at the end of October.

For me, one of the highlights of the 2019 TED conference was Simone Giertz’s “Sh*tty Robot Showdown” workshop. Simone makes hilariously awful robots (one of my favorites attempts to make breakfast, getting some of the milk and cereal in the bowl but flinging most of it exuberantly across the table). For the workshop Simone decided to spread the joy of making the most inept robots imaginable.

Each team got 4 weak servo motors, each capable of making a feeble 90-degree twitch that could possibly get your attention if it tapped you on the shoulder. We also had a counter full of random parts - pipe cleaners, foam blocks, popsicle sticks, giant playing cards, a calculator - and about an hour to hot-glue them and the servo motors, with their very heavy control board and battery pack, into something that could reach a finish line 1 meter away. Across carpet. This was not an easy task.

So I asked myself: What would artificial intelligence do?

People give AI this problem on a pretty regular basis, and it turns out that AI tends to do pretty much the same thing every time: it assembles all the parts into a tall tower and then simply falls over. Unless the rules specifically say that it has to get every body part over the finish line, falling over technically solves the problem.

So our team had a plan, and Operation: Lean Machine was underway. We began the process of building the tower (cable wrap filled with pipe cleaner, reinforced with popsicle sticks, and topped with cartoon eyeballs), and programming the servo motors to lower the arm onto the finish line. When we had made enough progress that it was beginning to be obvious what our robot was designed to do, Simone came by our table. Although the rules didn’t specifically say that we had to get every robot part over the finish line, she said, and although falling over would technically solve the problem…

People who train AIs to do stuff run into this problem All The Time. AIs can be annoyingly effective at solving problems via evil hacks, from an algorithm that learned to remotely crash its opponent’s computer during tic-tac-toe, to a Tetris-playing AI that learned to pause the game forever so as not to die. I was pleased to be providing a real-life reenactment of an evil AI hack.

Eventually Simone decided that our Lean Machine could participate, and the legality question would hopefully be resolved in the most hilarious manner possible.

Here are the robots at the starting line.

At the count of three, we all turned our servo motors on, and the robots began to slowly twitch, spin, or even flip helplessly onto their backs. In the first half-second of the race, our robot slammed its tower arm toward the finish line…

…and missed it by an inch.

I guess we should have made the tower taller.

The robot that won the race was the one third from the top, which waddled its way on four foam flippers, dragging its belly millimeter by millimeter across the carpet. Half the robots never crossed the starting line. It was a worthy challenge.

The moral of this story is: sometimes humans can learn a lot from a hack-happy AI. Oh, and always check your measurements.

AI Weirdness supporters get bonus content: An ENTIRE deleted blog post, which is not on my main blog because:

1. Its best attempt at generating human faces is scarier than any I’ve ever seen
2. Its creators have already taken the tool offline.

Robotics teams: why not name them with a bot?

Bonus: Put all your money on Pickle Rake