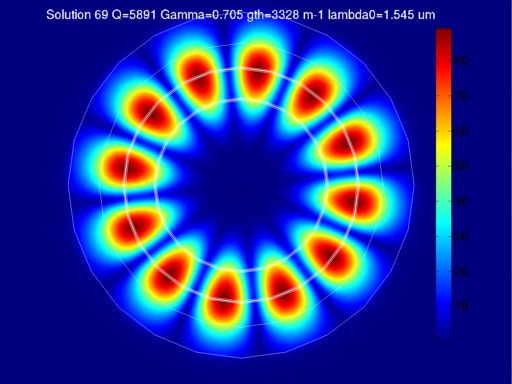 Light in a circular cavity makes a variety of standing wave patterns, some of which look like flowers, wagon wheels, or even tie-fighter spaceships. These images are from my simulations of the light in the cavities of nanolasers - each pattern is called a mode, and the smaller the laser, the simpler the mode tends to be.

In our lasers, the modes that tend to do the best are the whispering gallery modes - for example, the mode at the upper center. Whispering gallery modes get their name from the whispering gallery phenomenon first noticed with sound waves in cathedral domes. People noticed that if they stood along the perimeter of some cathedral domes, the sound waves from a whisper would bounce along the walls of the dome, and could be clearly heard at certain other places along the dome’s perimeter. In the case of our lasers, it’s light that bounces around the laser cavity - wavelengths that make an integer number of oscillations in one round trip end up forming a sort of circular standing wave. Whispering gallery modes appear not just for light and sound, but for other kinds of waves as well, like matter waves and gravitational waves.