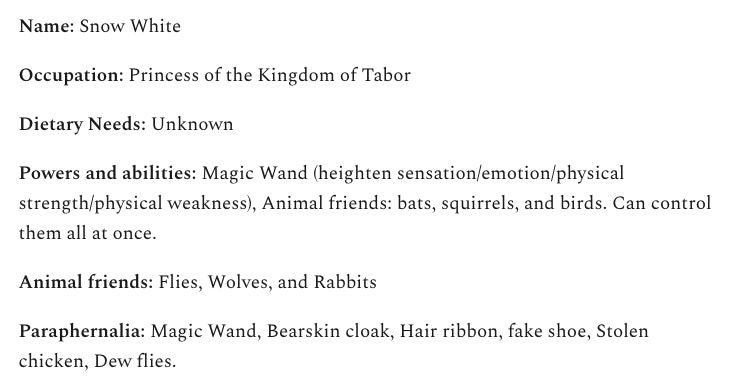 The next Disney princesses

When I saw the princess from Brave appear unexpectedly in an AI’s attempt to illustrate some misheard sea shanty lyrics (just another day on this blog), I had to look her up to remind myself her name was Merida. I ended up on the Disney Wiki entry for Merida, which got me wondering whether I could generate new Disney princesses.

I used GPT-3, a set of big text-generating neural nets trained on huge amounts of internet text. The GPT-3 models have seen wiki articles before, and there’s a LOT online about Disney princesses, so I decided to see what they could do with just two example entries adapted from the wiki, one on Merida and one on Moana.

Here’s what DaVinci, the largest of the GPT-3 models, generated. After just two short examples it had figured out how to add new entries following the general format, and even knew to generate them about Disney characters. It got many details correct! It also got many details wrong.

Occupation: Princess of the Kingdom of Tabor

Powers and abilities: Magic Wand (heighten sensation/emotion/physical strength/physical weakness), Animal friends: bats, squirrels, and birds. Can control them all at once.

Occupation: Prince of the Forest

Likes:His family, The Greater Good, Being outside, Being With His Mothers Friends

Powers and abilities: None, save for her intellect and empathy

Occupation: Queen of Pride Rock, princess-in-exile (formerly), Second in command and leader of the Lion Guard

Paraphernalia: The Lullaby Scepter, Her fleet of gnu, Thorn

But DaVinci stuck with existing Disney characters, even at the highest creativity setting. That’s technically what I asked for, since its task was to add to the end of a list of Disney characters. But it wasn’t what I wanted. I wanted new characters.

So I turned to the smallest GPT-3 model, Ada, hoping it would be confused enough to fail to come up with existing characters. It worked.

Occupation: princess of a village

Powers: a large amount of ink in her fingers, ability to draw lines with it, vines, chicken

Dislikes: Lots of bugs and anything with legs

Personality: Combative, passionate, impervious to cruelty and aversion to insanity, does not believe in any of supernatural powers and believes in a new and dangerous Age of Men

Powers and abilities: Superhuman strength, immunity to supernatural influences, flight with a Ten-Foot Pole and built sturdy boat and canoe, omnipresence: taking on the form of anyone, able to fly if called upon by renown indestructible courage skill at coup de grace, supernatural invisibility, unlimited memory and recall, and a super-strength equivalent to that of a God, and replenishing drinks at whim, and magic flutes.

Dislikes: Being tied down to a chartered vessel to ensure justice for stealing her crewman's land, her family's dangerous past, pirates

Some of these princesses seem a bit overpowered, but to know for sure, I’d have to see the villains.

I only had room for some of the princess profiles here, since they’re quite long, but I also experimented with the other two GPT-3 models. Become an AI Weirdness supporter to read the rest as bonus content! Or become a free subscriber to get new AI Weirdness posts in your inbox.

Bonus: Voyage of the Misheard

Bonus: Curie and Babbage can make princesses too!