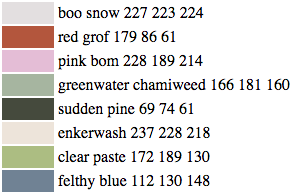 Last time I reported results that were, well… mixed. The neural network produced colors, all right, but it hadn’t gotten the hang of producing appealing names to go with them - instead producing names like Rose Hork, Stanky Bean, and Turdly. It also had trouble matching names to colors, and would often produce an “Ice Gray” that was a mustard yellow, for example, or a “Ferry Purple” that was decidedly brown.

These were not great names.

There are lots of things that affect how well the algorithm does, however.

One simple change turns out to be the “temperature” (think: creativity) variable, which adjusts whether the neural network always picks the most likely next character as it’s generating text, or whether it will go with something farther down the list. I had the temperature originally set pretty high, but it turns out that when I turn it down ever so slightly, the algorithm does a lot better. Not only do the names better match the colors, but it begins to reproduce color gradients that must have been in the original dataset all along. Colors tend to be grouped together in these gradients, so it shifts gradually from greens to browns to blues to yellows, etc. and does eventually cover the rainbow, not just beige.

Apparently it was trying to give me better results, but I kept screwing it up.

People also sent in suggestions on how to improve the algorithm. One of the most-frequent was to try a different way of representing color - it turns out that RGB (with a single color represented by the amount of Red, Green, and Blue in it) isn’t very well matched to the way human eyes perceive color.

It turns out that the color representation doesn’t make a very big difference in how good the results are (at least as far as I can tell with my very simple experiment). RGB seems to be surprisingly the best able to reproduce the gradients from the original dataset - maybe it’s more resistant to disruption when the temperature setting introduces randomness.

And the color names are pretty bad, no matter how the colors themselves are represented.

However, a blog reader compiled this dataset, which has paint colors from other companies such as Behr and Benjamin Moore, as well as a bunch of user-submitted colors from a big XKCD survey. He also changed all the names to lowercase, so the neural network wouldn’t have to learn two versions of each letter.

And the results were… surprisingly good. Pretty much every name was a plausible match to its color (even if it wasn’t a plausible color you’d find in the paint store). The answer seems to be, as it often is for neural networks: more data.

I leave you with the Hall of Fame: