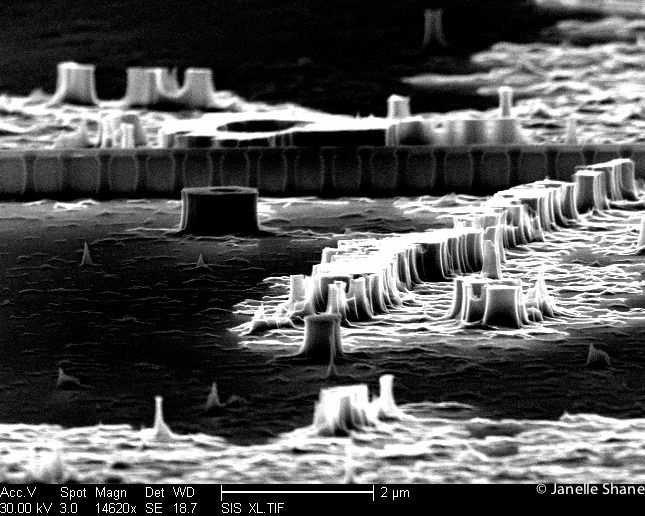 Dramatic patterns of light and dark chase each other across the landscape.  Jagged monoliths reach for the sky, while canyons, mesas, and mountains range on toward the horizon.

None of this is supposed to be here.

Well, the dark wall that spans the middle of the picture is actually supposed to be there - it’s supposed to guide infrared light (about 1.5um wavelength) from one end of a millimeter-long computer chip to the other.  I’d masked that part off to protect it from the etching machine, so my etching process was supposed to produce just that and just nothing else.  The rest of this crazy desert landscape is a sign that something went terribly wrong.

Luckily, this time I think I know what happened.  In fact, this was one of the rare cases where I could even see the problem with my own eyes - a blackened char appeared on the sample when I took it out of the etching machine.  I remembered that I had seen just the faintest welling-up of mounting oil around the edges of the sample when I put it in the machine, but had thought nothing of it at the time.  Now I know what happens.  The oil creeps up over the surface of the sample and has a merry good time producing protective masks of its own, protecting some areas that later get left behind as monoliths and mountains during etching.  These are the scenic areas; other areas just plain failed to etch entirely, and remained a boring plain.

So, next time: less mounting oil.  Lesson learned.  On to push back the frontiers of science!

Images made using a scanning electron microscope (uses electrons instead of light to illuminate objects, which lets it make much higher-resolution images than a light microscope can).  The scale bar on the images are 1-2 micrometers; a typical human hair is 100 micrometers in diameter.