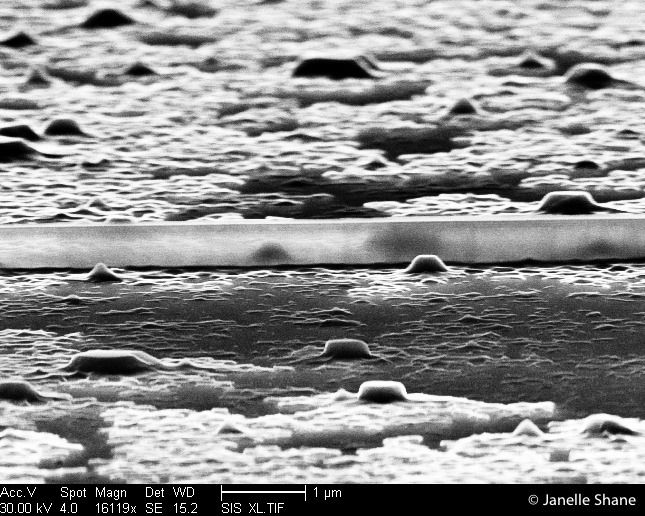 It looks like it could be an image of desert badlands - except for that strangely translucent wall.  In fact, this scene is much, much smaller. An ant could step over the wall without ever noticing its existence.

This image was taken through an electron microscope, of a microscopic landscape that’s been etched by plasma.  As in the full-sized landscapes we move through, the irregular features are the result of materials being eroded and deposited.  Here, instead of rock and dirt being moved by water, semiconductor materials (the kind we make lasers out of) are being altered by high-energy plasma, in a machine called the Reactive Ion Etcher.  But the two processes are still similar enough that the same kinds of features tend to form - mesas, canyons, hoodoos, and so forth.

And just as in macroscale landscapes, a long and straight feature like the wall is a sign of humans actively shaping the landscape. But the wall’s a little weird. Instead of being built on top of a flat surface, this wall was carved by plasma - the method’s kind of like making a wall by laying a metal strip across a flat expanse of rock and waiting for everything not covered by metal to erode away.  The wall’s likely only a few tens of atoms thick, thin enough that it’s translucent, yet it’s strangely strong, standing up to transport in and out of the electron microscope, and even from building to building.