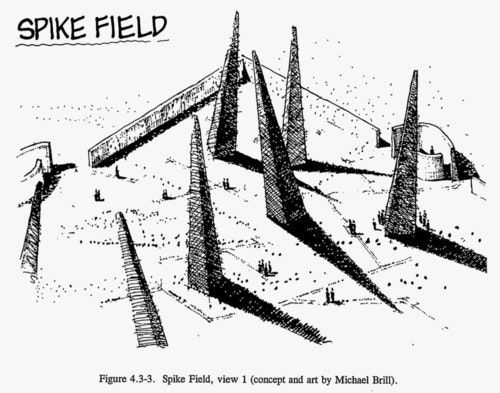 It isn’t every project that requires people to make plans for thousands or millions of years in the future. But some kinds of nuclear waste remain deadly for over 250,000 years, probably outliving all existing civilizations, languages, and possibly even humanity itself. So when people design nuclear waste storage facilities, they also have to think about what kinds of warnings might still be understandable so far in the future. People have proposed many approaches, from pictograms to carvings of horrified faces to genetically engineered cats or cacti that glow in the presence of radiation.

One class of proposals from a 1993 report would change the landscape itself to appear shunned, forbidding, or useless:

The report authors recommended “Menacing Earthworks”, but to me this seems unsatisfactory - it seems like future beings might find it interesting enough to investigate, with an inviting pre-prepared construction site at the center. There are even viewing platforms! So I gave a summary of a few of the designs to GPT-3 to complete, to see if it could suggest some scarier alternatives.

Some of its suggestions would fit right in with the human designs, about as likely to warn away/confuse/intrigue future civilizations.

Sphere of Gravity
A large sphere of rammed earth or metal, so smooth and featureless that it gives the illusion that it would attract any object that came into contact with it.

Randomization
A large circular area with random dips and peaks of various sizes, with alternating coloured layers of sand.

The Giant Hand:
a tall, narrow, rectangular slit in the earth, with a huge hand protruding from the bottom.

Cratering
Large craters on the site, which would be visible from the air, and give an impression of a site which has been blasted and destroyed.

Dangerous Stairs
An enormous set of crisscrossing, stair-like structures made of concrete, covering the site from view.

Upside Down Landscape
A series of artificial hills constructed upside down in each corner of the site, which would still appear strange even after years of use by wildlife.

Horizontal Plinth of Cloudy Quartz and Bismuth
A thin stone strip placed flat along the landscape, from which a series of large cloudy quartz crystals and bismuth balls will protrude.

Other neural net suggestions seem a lot less effective, mostly because they wouldn’t be even slightly forbidding:

Warning Stones:
Tiny stone monuments, placed in the soil in the shape of a natural formation, which could be used to generate a narrative about the site’s dangers.

Fairy Ring
A large circular ring of mushrooms around the site, which after some time would grow together and form a continuous ring.

Disrupted Pollen Lines
Certain native plant species such as junipers and yew could be planted to indicate that there is no farming or building allowed.

Robot Sculptures
A series of very-large-scale sculptures of robots, which would be visually striking and memorable from a distance.

Another class of neural net result would probably be pretty darn noticeable, and pretty darn scary, if anyone could figure out how to actually make them.

Infinite Mountain
A large decorative mountain that would continue to grow indefinitely at the center of the site or in its vicinity.

Distortion of Time and Space
A massive device that would alter the flow of time and gravity in the vicinity.

Hydrothermal Alteration Zone (HAZ)
A large geothermal area full of exploding geysers, boiling mud pools and a foul odor, sometime described as smelling like rotten eggs, sulfur, and chlorine. Such a place has a history of being less wanted by the local peoples, and will not be easily reclaimed.

Cosmic Rift
A large opening at the site through which a small pebble might fall endlessly.

In the examples above I prompted GPT-3 with the sentence “Proposals for warning our descendants away from a nuclear waste storage site:” followed by a few of the forbidding landscapes that humans had proposed.

But could the landscapes get spookier if I raised the stakes? I tried changing to the prompt “Proposals for warning our descendants away from a place of utter cosmic horror, the nature of which we dare not whisper, and which may totally destroy any mortal foolish enough to linger at the site:” and YES they got MUCH scarier. Here was one of its first suggestions: