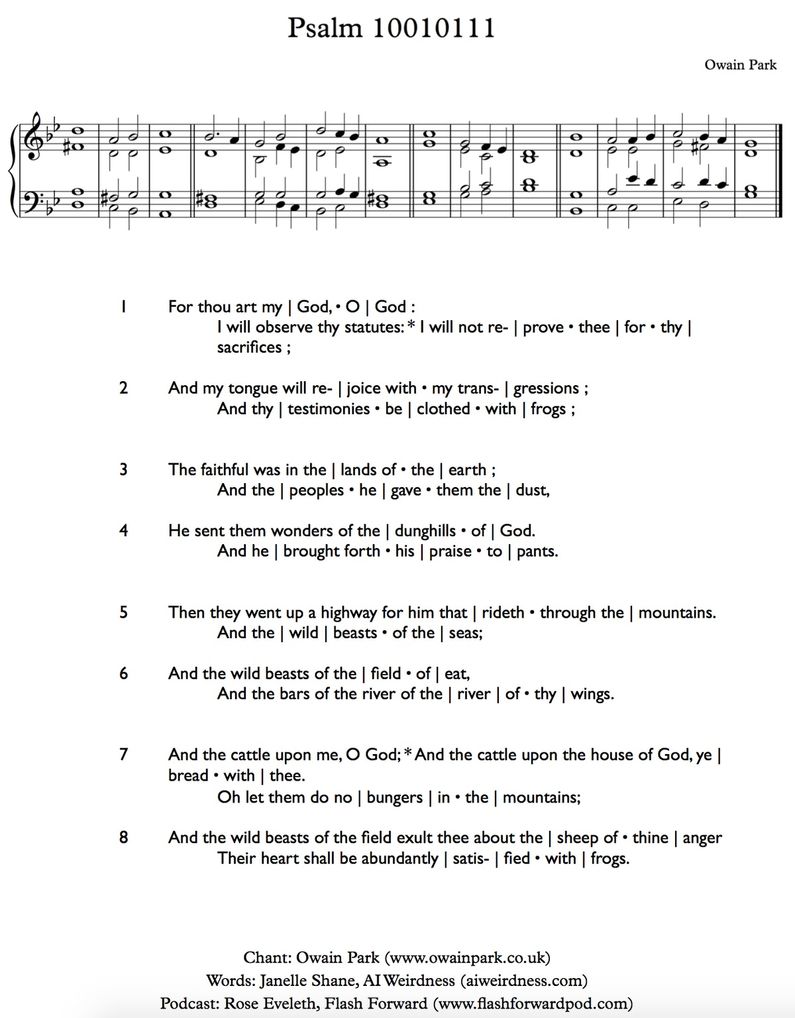 A computer tries its best to learn psalms

There’s a type of computer program called a neural network that tries to imitate whatever dataset you give it. The programmer gives it no explicit instructions about what the dataset is like; whether it’s poems or prose or a list of pies. The neural network has to figure all that out for itself, as best it can.

I recently helped with Rose Eveleth’s podcast Flash Forward, which is a science fiction/technology speculation podcast in which she and her guests talk about a new hypothetical future each week. In this recent episode, we imagined what would happen if a scientist one day tried to create a new religion by training a computer on all the existing texts of world religions. I simulated this on a much more modest scale using a neural network on my laptop, just to see what the results would look like. The results were mostly incomprehensible, but there were a few interesting bits:

The camel (might), in this day, face the lord’s light. He is never precious (to the camel).


The chicken listed of the enmity is not a guest of the chicken of his people, as the universe had met the rain of that day.

Here you can hear the entire science fiction story, and some real religious scholars talking about the computer-generated text.

I also trained the neural network on a much smaller dataset, which is much easier for it. This time, I gave it just the set of 150 psalms from the Jewish and Western Christian tradition, verse-form songs of praise, thanksgiving, or lamentation. The neural network would ideally love to memorize these and read them back word-for-word, but because it didn’t have enough brainpower, it had to generalize as best it could. Here’s a typical example of its attempts to recreate a psalm:

If you are a choir, you can sing one of these, thanks to Owain Park, who arranged a neural network psalm as a chant based on the Tetris theme. (I assembled this particular psalm from a bunch of individual lines that the neural network produced).

For thou art my God, O God:
I will observe thy statutes:
I will not reprove thee for thy sacrifices;
And my tongue will rejoice with my transgressions;
And thy testimonies be clothed with frogs;
The faithful was in the lands of the earth;
And the peoples he gave them the dust,
He sent them wonders of the dunghills of God.
And he brought forth his praise to pants.
Then they went up a highway for him that rideth through the mountains.
And the wild beasts of the seas;
And the wild beasts of the field of eat,
And the bars of the river of the river of thy wings.
And the cattle upon me, O God;
And the cattle upon the house of God, ye bread with thee.
Oh let them do no bungers in the mountains;
And the wild beasts of the field exult thee about the sheep of thine anger
Their heart shall be abundantly satisfied with frogs.

The first line of a novel, by an improved neural network