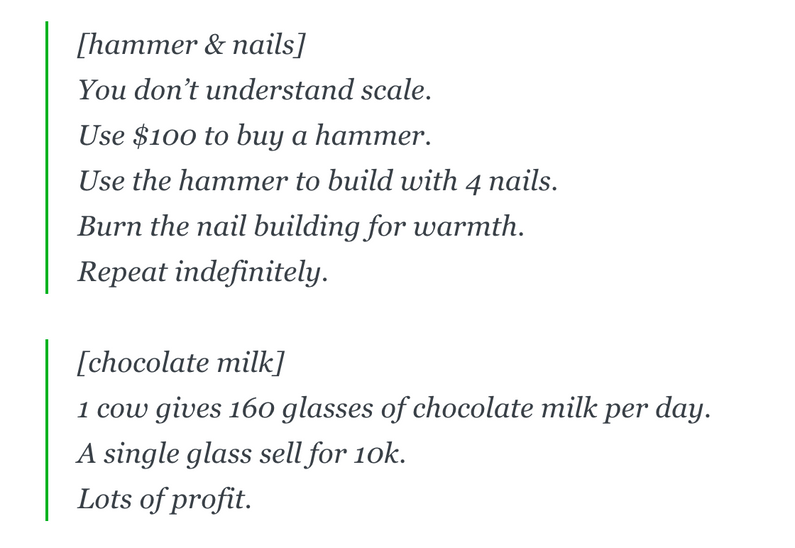 One of my favorite ways to mess around with text-generating AI is to see what it does with new games that didn't exist on the internet back when its training data was collected.

OpenAI's GPT-3 models were trained with data that cut off in late 2019 which means that they're unaware of certain major world events, as well as of the latest internet memes.

Recently someone posted this hilarious bit of startup advice that had people posting terrible advice of their own:

I guessed that even if a neural net like GPT-3 can't possibly have seen this meme before, it would still be capable of giving terrible startup advice. So, I entered the entire above sequence of brilliant entrepreneurial moves as prompt text, preceded by the word [tomatoes] in brackets to help indicate this was supposed to be a short thing about tomatoes. Then I wrote "[" and let it write a short thing about something else.

Unsurprisingly, the largest GPT-3 variant was the best at catching on to the format. It made the leap that you could amplify eggs in a similar way. And you end up making $1 million on each egg!

Object permanence is not a strength of DaVinci's - keeping track of the status of physical objects isn't really in its job description. Its world is text.

GPT-3 DaVinci does at least realize that you should end with profitable things happening.

[hammer & nails]
You don’t understand scale.
Use $100 to buy a hammer.
Use the hammer to build with 4 nails.
Burn the nail building for warmth.
Repeat indefinitely.

I also turned to the smallest GPT-3 variant, Ada. It caught onto the format only partially. It got that it was supposed to be about tomatoes. And possibly about money?

[tomatoes]
They are botanical machines.
Of all the tomato varieties, they only grow once!
Traversing is their way of existence.
They do this every day.
They can do "rainbow fruit trees", making "green smoke and crumble flower."

Had I not stopped the generation process, I'm not sure how long Ada would have continued this next one. When people talk about researchers shutting down their AIs because of an unwanted outcome, this is often the kind of thing they mean.

[tomatoes]
You don't understand that it's basically the same thing as a bowl of cereal.
Potatoes in a can.
Pour the potatoes into 35 quart jugs and fill jugs to the brim.
Whisk soapmaker.
In little tub layers stout ash alum pot paper.
Divide into four equal parts of qt and rl into segments measuring 3.2 cm by 0.8 cm.
Wash wire wool in 80-95% dewashed water and rinse under tepid water.
Prepare three inches of hot coals, gently heat in center of stove 4 inches deep.
Roll up soap in crinkly napkins two times to fit into form according to volume-diameter. To remove bubble wrap insert aprons.
Heat a small hole as necessary per each pot.
Dip each slip to the brush onto each pot, then collect the whole wrap under the string from the soap's top to bottom.
Crackfish, partially hulled and cut to about 3 cm across, on an upright flake computer of sufficient volume.
Measure and cut parts of soap into even thickness, add by 1 cm to diameter of each bowl.
Take soap left out to apartments with sheets and wrap it up in a towel.
Fill Sanitary Pail with clay pot suders, layers clay that been finished of three times, each surface 3 cm thick, to the top of the pails.
Split soap in half 3 cm ¼ x 0.7 cm just below bottom of tub.
Fill bathtub lengthways and level with edge.
Lay soap at 4 cups depth, with top down.
In the dryer attach film and cling wrap, then lay sheet-hooks 1.6 cm apart on the film.
Place plastic apple cores on top of film.
Lay film and cardboard pails on top of each other.
Cap and secure, then dry for 7-10 days.

If you don't do the entire list, are you really cut out to be an entrepreneur?

I also decided to see what the two midsized GPT-3 models did with this startup advice. Become an AI Weirdness supporter to read the results as bonus material! Or become a free subscriber to get new AI Weirdness posts in your inbox.

Would you evacuate for hurricane "Destructor, yes, destructor"?

Think of cheese as many lines of code.