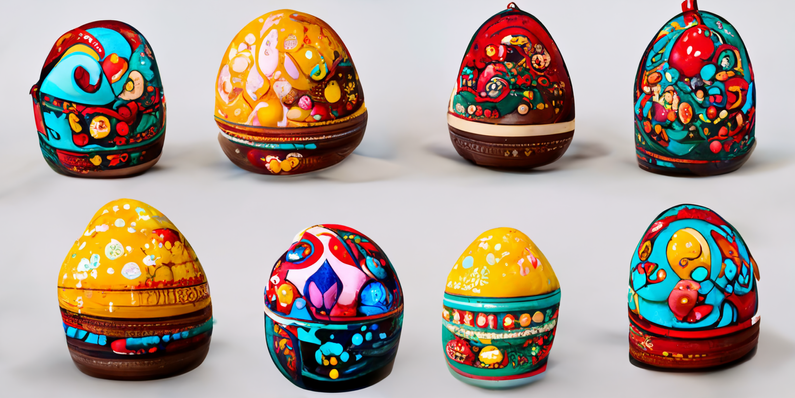 How would AI decorate an easter egg?

I've tried this before by training an image-generating model exclusively on pictures of easter eggs I decorated (they came out plain, if a bit wobbly).

I decided to see what I would get using a model based on CLIP, which has trained on a huge collection of internet images and text. Presumably that collection included Easter eggs?

For this experiment I used the image-generating model from Midjourney, which combines CLIP with an ever-changing mix of image generation methods (in other words, by the time you read this, the algorithm will already be different from the one I used. it's not a very scientific experiment). I gave it a phrase, and Midjourneys optimized the image to match the phrase to the best of its ability. (See the image caption for my prompt phrase.)

It knows what Easter eggs are! They are colorful and egg-shaped (although some of them look strangely double-lobed). You'll notice I added "acrylic on canvas" which is a signal to the AI to "make it a nice artsy picture please" - one challenge with using CLIP to generate images is that there are plenty of crummy pictures in its online examples.

Each modifying phrase (which I am going to refer to as "seasonings" as Kate Compton suggests) has a huge effect on how the AI renders "Easter eggs".

Since matte paintings tend to be backdrop landscapes for epic films, the AI has made the eggs epic enough to fit in with giant landscapes.

Is that a couple of fried eggs floating in the upper right? It appears so. In fact, as I tried asking for different kinds of Easter eggs, egg-themed eggs became a recurrent thing.

The most extreme case of eggs on eggs was, oddly, one that involved giraffes.

It's almost as if the AI panicked and started turning eggs inside out. Or maybe it's trying to optimize the eggness of the picture by adding even more stuff that matches "egg", even if it doesn't also match "easter".

I got it to generate a collection of pysanky, which are Easter eggs intricately decorated with geometrical patterns, traditional to Ukraine and Poland.

You'll notice a few fried-egg eggs among them. I also got some like these:

In an effort to make the eggs look even more Ukranian, the AI has added the Ukranian flag. I think there might also be tiny egg yolks? I'm seeing them everywhere now.

The eggs-themed-eggs trend isn't the case for every image-generating algorithm that uses CLIP - it may not even be the case for the Midjourneys algorithm tomorrow. But it made me smile.