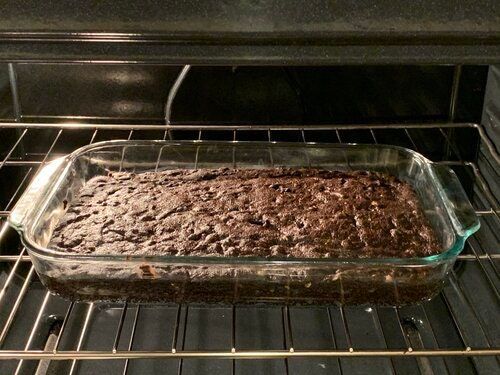 AI recipes are bad (and a proposal for making them worse)

Pictured above is an abomination in the making, a lesson in why humans should never trust what a neural net says just because it’s based on math. It’s a neural net generated brownie recipe called Chocolate Baked and Serves, and its distinguishing feature is the CUP OF HORSERADISH it contains. It was so bad that my eyes watered as I removed it from the oven.

Creating a functional recipe requires an intimate understanding of ingredients and their interactions with one another, of heat and spice and time. Today’s neural networks have none of that.

I’ve seen neural net recipes that call for crushed sherry or 21 pounds of cabbage. One of my personal favorites is a recipe called “Small Sandwiches” that called for dozens of fussily chopped, minced, and diced ingredients - before chucking them in the food processor for 3 hours. Part of the problem has been neural nets with memory so terrible that halfway through the recipe they forget they’re making cake.

More recent neural nets like GPT-2, given better long-term memory and extensive training on a huge portion of the internet, can make recipes that are more likely to pass for the real thing. Use talktotransformer.com to prompt GPT-2 with “Black Forest Cake. Ingredients:” and the quantities and ingredients will be reasonable, even if the whole thing doesn’t quite work (generating a few examples in a row, I saw some Black Forest recipes that called for kneading the batter, and one that suggested pouring the batter into a toaster).

It’s seen enough cake that it can lean heavily on human-written recipes. If I prompt it with weirder recipe names - say, recipe names generated by a neural net - things get even stranger.

NOTE: by my reckoning this produces a very gluey, greasy mess, tasting strongly of vanilla and baking powder.

Ingredients:
-2 cups all purpose flour
-½ teaspoon salt
-1 cup of dark brown sugar
-2 eggs
-1 teaspoon vanilla extract
-2 tablespoons vegetable oil
-¼ cup milk or other liquid if needed (it will make the cake softer if it is too warm)
-1 large chicken. Mix all ingredients and refrigerate for 30 minutes or overnight. Preheat the oven to 350 degrees.

-Gather the chicken by holding it by the top and both sides with both hands, just like you do to make meatloaf, then gently pop it into the casserole. Bake for 40 minutes or until chicken is cooked through.

NOTE: if only it had decided to leave out the chicken, rather than the chocolate

You can also toast your own bacon at home: Wishing to pay homage to the original KFC’s recipe, we had one of the new wraps try to land on the BACON HOLE.

NOTE: the neural net doesn’t specify what to do with all that meat, and perhaps it’s better this way. Nor, again mercifully, does it explain what it means by BACON HOLE.

So, AI recipes are bad. How much worse could they get?

Here is a google doc form where you can submit the worst, the weirdest, the most gelatinous, that vintage American cooking has to offer. When I get enough, I’ll train a neural net to imitate them.

Update: Results are posted! The recipes are …terrible.

Bonus: At last we know how to make Artichoke Gelatin Dogs

AI + Vintage American cooking: a combination that cannot be unseen