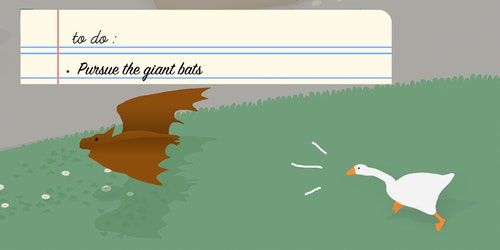 There’s a game called Untitled Goose Game, in which you play as a horrible goose that wreaks various forms of mischief on some mild-mannered villagers. You have a to-do list of mayhem such as:

It’s an unusual game. When the neural net GPT-2 was trained, the goose game didn’t exist in its training data, nor did anything quite like it. Given just a few items on the horrible goose’s to-do list as examples, could the neural net figure out that it’s supposed to be inventing ways a goose can be a menace?

I used talktotransformer.com to give GPT-2 the first 8 to-do list items from Untitled Goose Game, and then its job was to add more items to the list.

Here’s one of its attempts. Very busy, but not exactly a reign of terror. It’s more like a goose-run landscaping service.

Another of the neural net’s lists involved at least interacting with the groundskeeper, which is a start, since that’s how the game begins too. But is this a list for a horrible goose, or a list for some kind of exuberant witch?

And then there’s THIS list, which is at least somewhat unsettling, I’ll give it that.

Or this list. The goose is causing stuff to happen to the groundskeeper, but it’s weird stuff, or else things that aren’t annoyances exactly.

The neural net had no basis for games based on low-stakes goose mayhem, so I can hardly blame it for floundering. It seemed to at least be mostly sure that this was a list of tasks for a video game, because it would often end its list by offering (completely wrong) tips on getting past the groundskeeper. But its tasks were usually out of character for a goose that’s supposed to be antagonizing everyone and everything.

And some of the tasks were beyond weird, into seriously glitchy AI territory. I don’t know what game has these in its to-do list, but maybe I need to play it.

Pursue the Giant Bats
Play with the Pestles
Paint the Chicken with the Golden Hourglass
Unlock a Swimming Pool in the Sky
Grow a Potsnake
Cookie-Coated Fun
Make the Lettuce Grow on the Loom
Let the Thumb Get in the Garden
Flask, Flask
Do a Bucket of Gold Plunder
Make the Broken Sunlight
Enjoy the Breeze in the Breezing Bay
Give the Wasp Lady A Broom and an Oink
Make the Pestles Eat an Entire Tree
Have a Big, Wild Flower Blow in the Wind
Make a Lavender Suture

Of course, some of the neural net’s to-do tasks invented new and, um, murder-y ways of antagonizing the groundskeeper. A combination goose-robo-apocalypse would be a terrible sight to behold.

AI Weirdness supporters get bonus content: A couple more lists of neural net-generated goose tasks, including one list where the neural net was strangely obsessed with stumps. Plus the murder list. Or become a free subscriber to get new AI Weirdness posts in your inbox.

Bonus: An abnormal number of pants