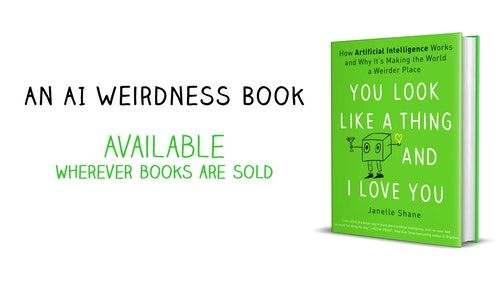 Here’s a look back at a few of my favorite projects from 2019!

Here are all the titles that didn’t make the cut.

I wrote a story for the New York Times’s Op Eds From The Future series about a population of feral self-driving scooters in NYC, whose evolutionary programming allowed them to survive on the streets. By 2031 they’d been evolving for a decade, but not all the behaviors they evolved were human-friendly. Read the story!

I trained a neural net to generate crochet hat patterns, only to discover that its hats had a tendency to explode into hyperbolic super-surfaces with jaw-droppingly huge stitch counts. One, called simply “The End” would have consumed enough yarn to wrap the known universe in a ball of yarn about a billion light years thick.

The self-aware spaceships of Iain M. Banks’s Culture novels sometimes have rather sassy names. I used GPT-2 to generate more of them.

I gave a talk about AI on the TED main stage! And also found out how a neural net would have written it.

In a quieter moment, I used GPT-2 to find out what tea will be like in The Simulation

8. Lozenge rooms? Or eating the moon?

Two terrific dungeon crawling games came out this year, both made with the neural net GPT-2. In GPT-2 Adventure, nothing seems to work but gameplay is maddening and mesmerizing. In AI Dungeon 2, gameplay is astonishingly flexible. I once entered the Great British Bakeoff and won it. As a dragon. Play AI Dungeon 2 yourself!

I had a neural net try to generate Christmas carols, but though I used a more advanced one than last time, it still got confused. Voice actor Joe Zieja recorded one of the more sinister-sounding carols and it is MAGNIFICENT

I generated lists of drawing prompts for Inktober, and people drew some truly astonishing things in response. Check out the #ainktober hashtags on instagram, tumblr, and twitter, and prepare to be blown away.

I used a neural net to generate new medieval professions. Cactus-baiter, Blusterer, Enchanter of Clocks, and more. AI Weirdness supporters get them as bonus content! Or become a free subscriber to get new AI Weirdness posts in your inbox.