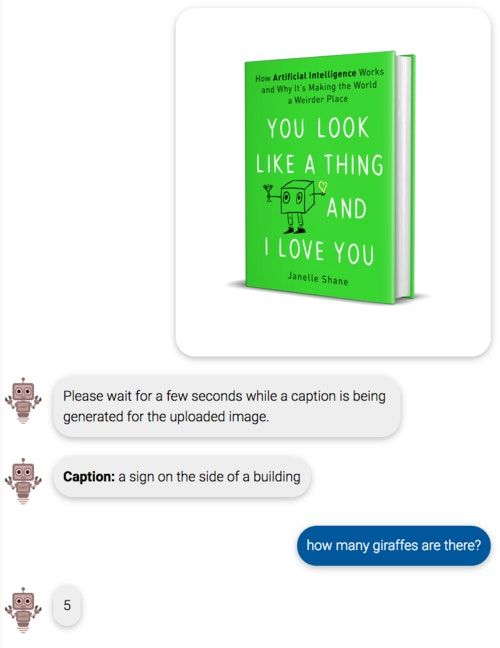 I trained a neural net on my own book

I spent the last two years writing a book on AI. It’s called You Look Like a Thing and I Love You, and today it’s finally out!

And since training neural nets on things is a large percentage of my blog, of course I had to find out what would happen if I trained a neural net on my own book.

I present to you: an exclusive excerpt from my book, You Look Like a Thing and I Love You (very nearly named “Kevin”) , as imitated by the neural net GPT-2-345M:

“Using graphics as a starting point, AIs can place themselves and other objects in strange and unexpected places. Maybe a human was using a restroom in a strange combination that also produced a lightning bolt and a blank space when they approached the cubicle door—or maybe there’s a tree in the way that has fake bulbs set into it. Maybe there’re also human footprints that the AI thinks are there—which is odd if humans had accidentally walked along the bathroom’s edge. But what happens when the AIs get pushed, slammed, or tripped over by sheer force of their own carelessness? Maybe it’s time to train a new AI to deal with the situation in a more appropriate and smarter way.”

“AIs can sometimes solve problems in unexpected ways. For instance, some AIs have been known to use chemistry to make their robots fly or generate piranha-infested ice.”

“Artificial intelligence can also help automate tasks like splitting a car’s tires or slowing down a snail’s escape. Its versatility is its selling point.”

“AIs can chew through a dataset like butter, crank something up to the size of a football, or even defeat nobody with a few lucky laser cuts to the skin.”

“In case you were wondering, ‘how many giraffes are there?’ is a tough question to answer with any degree of precision. For one thing, as we all know, computing the number of giraffes is a huge time-sucking task.”

No wonder one neural net called my book “A featureless masterpiece of tough-minded language”. And it’s no wonder another neural net wrote “You Look Like a Thing and I Love You will stay in your cabinet, shelves and cereal box!”

I generated a longer excerpt, which you can read (along with bonus content every time I post) by becoming an AI Weirdness supporter. Or become a free subscriber to get new AI Weirdness posts in your inbox!

And if you want the book itself, you can now get it any of these several ways! Amazon - Barnes & Noble - Indiebound - Tattered Cover - Powell’s

Bonus: I am dead, but not without a goodly fortune.