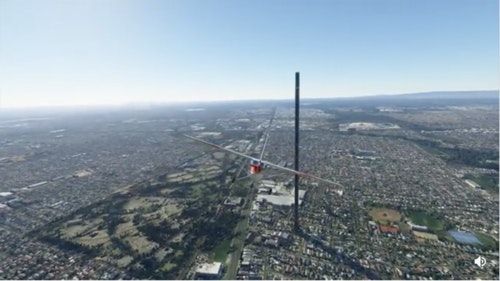 Planet Earth From Above

Melbourne, Australia: home of kangaroos, botanical gardens, and a surreal monolith, jutting impossibly tall and narrow above its unassuming neighbors.

[images from a video by reddit user fulltimespy, in a successful completion of the Monolith Challenge]

This is the virtual Melbourne of Microsoft Flight Simulator 2020, where players are flocking to see the weird building and, naturally, land on its roof, before the game is patched and the monolith disappears.

How did this happen? Microsoft Flight Simulator 2020 uses AI to fill in building details from a combination of satellite images and crowdsourced data from Open Street Maps. And at one point, someone who was entering building height data for Melbourne made a typo, accidentally changing a building height of 2 stories to 212. Monoliths are gradually being discovered in other places as well.

Even barring typos, the task of reconstructing every building in the world from height data and satellite photos is really tough. A roof’s details might give clues about whether a structure is a historic villa or an office block, but it’s easy to make mistakes if, for example, you don’t know what the Washington Monument is.

Because a nondescript office building is a reasonable default guess given a square building pad and a many-story height, the AI will tend to populate the planet with them unless specifically told otherwise. The Statue of Liberty, the Taj Mahal, and the Eiffel Tower are all lavishly hand-modeled in 3D. But The Motherland Calls statue of Volgograd is a condo high-rise, Buckingham Palace is an apartment complex, the Leaning Tower of Pisa is a vertical concrete silo, and the Pyramid of the Sun is a nondescript warehouse with a hilarious tiny dome on its roof.

The AI is also making its best guesses when it comes to traffic patterns. It knew that this Boston street intersected a building somehow but didn’t know that the road passed through the building via tunnel. So it had the traffic drive up the side of the building.

Other terrain glitches force the traffic to do even weirder things. If the road is suddenly tilted vertically along the wall of a newly created canyon in northwest Iowa, the traffic will still drive on the road, just… sideways.

Water levels in particular seem prone to being incorrect, sometimes drastically so. The Pingualuit Impact Crater of northern Canada was apparently inverted by one of these glitches.

Bergen, Norway, has been transformed by this bug into canyonlike terrain, its buildings forced to adapt to the suddenly steep ground, their roofs rising like mushrooms for dozens of stories. It’s otherworldly, unrecognizable.

Greenland, on the other hand, is terrifying. The available terrain and satellite data is less precise, so pixels are sometimes visible as square-edged neighborhood-sized patches of gravel. The far north is marked by 20,000 foot ice walls, improbable ice spikes, and strange shimmering rifts. The geographic North Pole itself is unreachable; players report that any attempt to descend below 2,000 feet results in the player being rocketed skyward by a strange repulsion force.

Some Microsoft Flight Simulator 2020 players are thrilled with the unusual terrain, while others are disappointed when the photorealism is broken, and/or when their city’s distinctive architecture and most beloved landmarks are replaced by nondescript concrete jungle. The AI itself isn’t going to be able to reconstruct the world’s weirdness from satellite photos, so already people are crowdsourcing hand-modeled landmarks. You can install an add-on to convert Stonehenge, for example, from a miniature flattened Spinal Tap version to a full-sized 3D model.

As the developers tweak their algorithms and fix other things by hand, slowly the weirdness will be ironed out, the rivers and lakes set back in their beds, the statues restored to their detailed glory. Many will be disappointed when it happens - I’ll particularly miss the Melbourne Monolith. It would be nice to have a weirdness slider that goes from normal to Ragnarok, amplifying terrain chaos, perhaps adding the occasional floating mountain range or lava lake.

I also tried prompting GPT-3 to write an Atlas Obscura entry for the Melbourne Monolith. It added entries for a few other Melbourne landmarks, like the Artificial Gardens of Loria and The Very Pickled Centurion (did you know that the Lost Bar, like the Australian rules football lounge, is 10,000 light years away from the city it’s located in?). Become a supporter of AI Weirdness and get these Atlas Obscura entries as bonus content!

[aqueducts of Denali, screenshot by daveonthenet]

The story behind AI drawing prompts