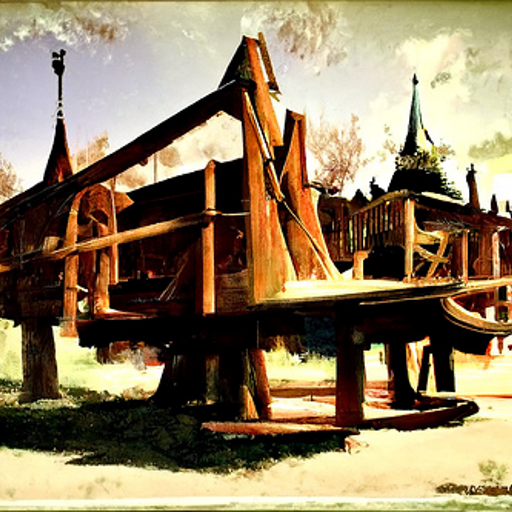 I remember when my hometown got one of these giant wooden playgrounds. It must have been in the early 90s and a kid could get lost for hours in there.

It proved difficult. First, a little online probing reveals that there's no specific term for these, other than "one of those playground kits by the Leathers company".

It turns out asking CLIP/VQGAN for "playgrounds by leathers" results in a hideous playground apparently made of a disturbing mix of concrete and leather.

I switched to another method, CLIP+Diffusion, and tried to get more descriptive. I had to specify wood quite emphatically or it would try to make them out of modern plastic and steel.

The CLIP+Diffusion playgrounds definitely were more aesthetically pleasing than CLIP+VQGAN, but they didn't have the right vibes. I tried to vary my descriptions.

I had fun playing up the various vibes, although none of them resembled the original, very distinctive, playgrounds.

I also experimented with Katherine Crowson's recently-released CLIP-guided CC12M Diffusion script, which uses CLIP a different way to produce generally more coherent imagery. It produced images that were definitely complex and made of wood, but were more like the construction site of a county fair horse barn than a playground.

Given the "playgrounds by leathers" prompt, CC12M Diffusion didn't do playgrounds made of leather; it did images that were neither playground nor leather. Very aesthetic. Very not anything.

In the end I never ended up with even an echo of those old playgrounds. I got shading and texturing and vibes from an image-generating AI that seems to simply have no idea what I was talking about. Those old playgrounds were too old, and left too little a trace online. An AI like CLIP isn't trained to generate everything in the whole wide world, it's trained on whatever people had put online at the time.

I've collected more interesting but also-not-it wooden playgrounds in a bonus post for AI Weirdness supporters. Or you can become a free subscriber to get regular AI Weirdness posts in your inbox!

Predicting the next toy fads with AI