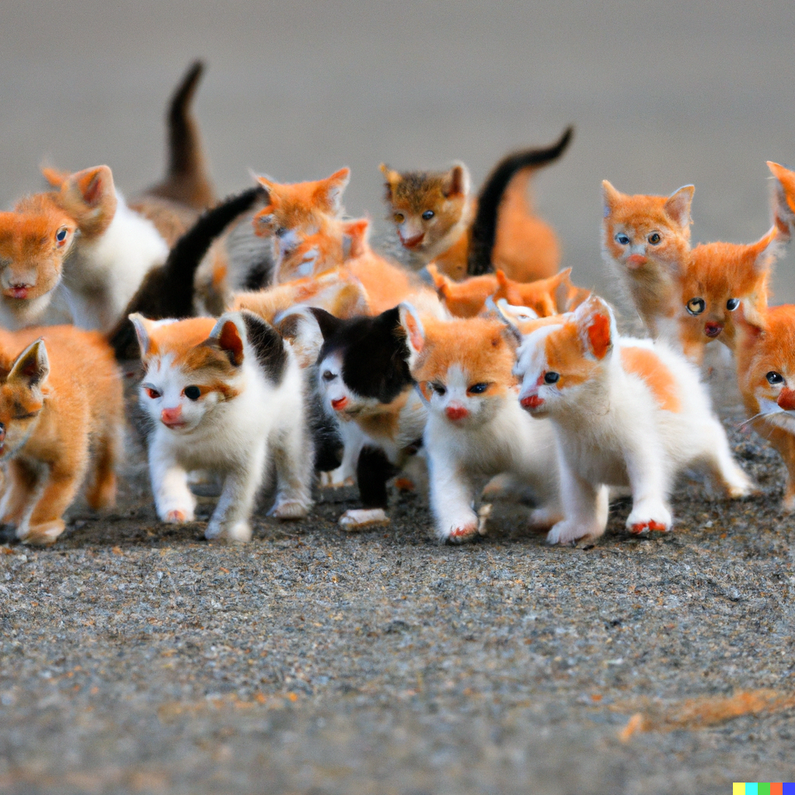 One thing I've noticed with image-generating algorithms is that the more of something they have to put in an image, the worse it is.

I first noticed this with the kitten-generating variant of StyleGAN, which often does okay on one cat:

but is terrible at a crowd of kittens.

A few years later, Dall-E 2 is a LOT more coherent despite having a larger job to do. But it's still susceptible to the kitten effect.

A vast herd of cute kittens thundering across the plain:

Similarly, there's a huge difference in quality between a single dog and a herd of them.

And it's not just animals, of course. Here's the kitten effect played out in lucky charms marshmallows:

A single lucky charms marshmallow piece on a plate:

a single lucky charms marshmallow piece on a plate, labeled with the name of the shape:

It was not obvious to me that this should be so. If it can make one kitten, why can't it make ten of equal quality?

My theory is this is may actually be not a numbers thing but a size thing. When I asked Dalle-2 to generate a kitten that takes up less of an image, the kitten gets way, way worse.

It's not out of pixels to make the detail with - note the sharpness of the wood grain. But at this scale it has run out of something nonetheless.

Bonus post! In which I get DALL-E 2 to look increasingly closely at a giraffe.

Bonus: How closely can I look at a giraffe?

Bonus: There can be only one