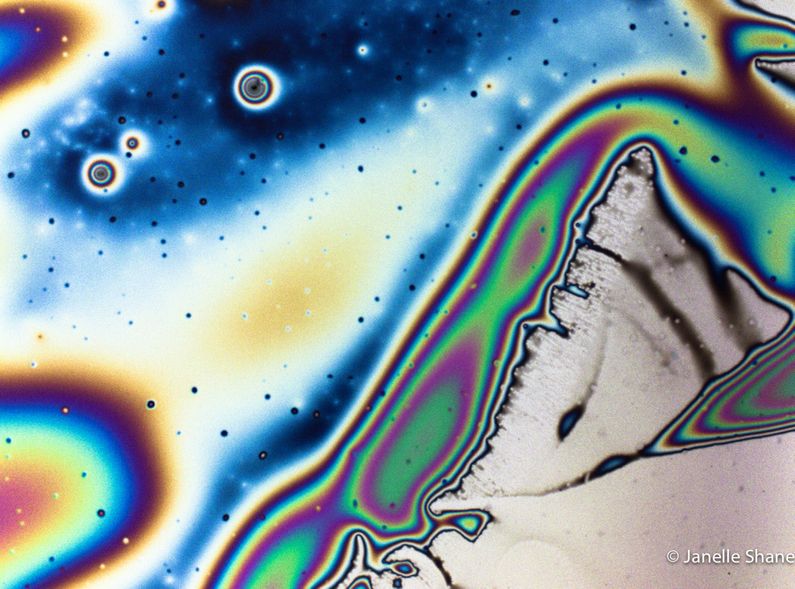 It’s too bad that whenever I get interesting images, it’s usually a sign that something’s gone wrong.

In this case, the rainbow rings means that there’s some junk left on my sample - this is residue left behind from IPA (now, that’s isopropyl alcohol, not India pale ale, and yes, this does sometimes confuse me at breweries).

The rainbow phenomenon is called Newton’s rings, and it’s the same source as the pretty rainbow patterns you see in soap bubbles, or in an oily parking lot puddle.  When you see this kind of pattern, it means there’s a really thin film of something (in this case, IPA residue) whose thickness is varying just slightly.  The white light that’s hitting the film is really made of a rainbow of colors (you can see them separated in a prism, for example), and depending on the thickness of this film, some of the colors that reflect from the top and bottom of the film are interfering with each other.  The interference may mean the reflected light adds up, or cancels itself out, depending on the film thickness.  Because each color is made of light waves of different wavelengths, for some thicknesses green light will add up when it bounces back, and for some thicknesses it will cancel itself out.  For red, this will all occur at different thicknesses.  So, you end up with bands of colors.

I took my screenshot, grumbled, and did another rinse, being careful to dry the surface well this time.  Pretty rainbow stripes gone - mission accomplished!