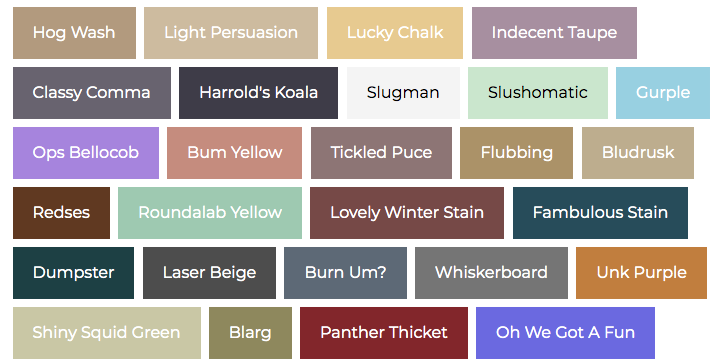 One of my first experiments with neural network text generation was to generate and name paint colors.

I trained a neural net from scratch on lists of colors I could find online, and with no prior training on English or any language (and therefore no idea what paint colors were) it managed to reproduce some of the letter combinations in the originals. But it lacked the context to know not to generate colors like these:

In the nearly five years since, a lot has changed in AI. Now we have giant internet-trained neural networks. And these neural networks have not only seen English before, they have also read all the popular paint color sites. Give them a list of existing paint colors and ask them for more, and they'll respond with more paint colors lifted straight from online, or altered only slightly.

As the January 2022 Futurist in Residence at the Smithsonian AIB, I've spent the month thinking about how much difference our starting points make, how we have to take care what foundations we build on when working with AI. I realized that to get a modern AI to generate entertaining paint colors, I would have to take inspiration from the AIs of five years ago. So as my starting point I used that original neural net's garbled paint colors. And I got these:

What I find interesting here is that to generate a color, the AI not only had to come up with a name, it also had to specify the color in Red, Green, and Blue coordinates. A computer screen generates its colors by illuminating tiny red, green, and blue dots that blend together when you view them from a distance. By telling the computer how much red, green, and blue to use (on a scale from 0 to 255), you can specify any color. I didn't tell the AI that it had to follow each color name with a list of three whole numbers. But it had seen enough Red, Green, Blue color listings that it was able to follow the format from just a couple of examples. Mostly. At least, the largest AI could.

To make these paint colors I used GPT-3, which comes in models of different sizes. DaVinci, the model that generated the Hog Wash list above, is currently the largest. Ada is the name of the smallest model, and it was not so great at sticking to the format.

This color Ada specified is slightly more green than a computer can display. Its green coordinate is supposed to max out at 255; this one goes to 311.

And then there's Blobsday, which is almost twice as red as is supposed to be possible:

Painted Batman is an impressive 8.5 times redder than a computer is supposed to be able to display.

What does this mean? Can the color Painted Batman only be properly appreciated when viewing the computer screen illuminated by several single-frequency red lasers, after having spent an hour staring at a green wall?

Then there's Starbat, which has FOUR color coordinates.

Some of our other color scales have four coordinates (like the ones designed for print), but the common ones don't go up to 255. I like to think that Starbat is a color meant for birds to see, and the 1st color is actually meant for their ultraviolet vision.

Here are some of my favorite of Ada's colors, at least the ones that CAN be displayed on standard screens.

If you find yourself near the Smithsonian, till mid-February 2022 you'll be able to grab an AI-generated new year's resolution and an AI-generated paint color of your own. Literally grab - there's an AI Weirdness exhibit in AIB Futures with resolutions and paint colors on hundreds of souvenir tags. If you visit, I'd love to hear which one you got!

Subscribe now
Already have an account? Sign in
neural networkspaint colorsgpt-3smithsonianreturn of stanky beaneveryone loves gurpleand they have to respect blargbum yellow was nearly the 2022 color of the year