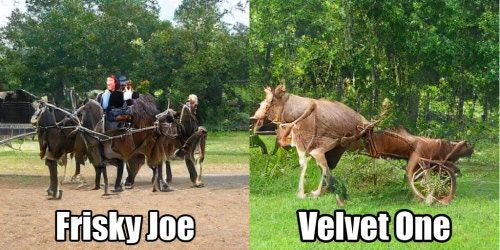 What is the opposite of guacamole?

Last week I attempted to illustrate some neural net-generated racehorses by turning to another neural net - this time, one that generates images, called BigGAN.

Using Joel Simon’s ganbreeder.app interface, I’m able to see what BigGAN can generate for any of ~1000 categories of objects. Not finding a category for “racehorse”, I decided to use the nearest thing I could find, “horse cart”. Which, um.

But ganbreeder makes it easy to combine multiple categories - if “horse cart” is one point in space and “great grey owl” is another point in space, when you travel on a straight line between them, the horse carts gradually grow feathers and owl faces, ending in something that sort of resembles an owl.

Ganbreeder also allows you to travel AWAY from a destination. So I can start at “horse cart” and then try to remove some of the cartness by deliberately traveling in the exact opposite direction of “shopping cart”. Sure enough, the image morphs into a furry four-legged creature with no more sign of wheels.

What this also means is that I can take any category of thing and generate its opposite. For example, I can set “guacamole” to -100%, inverting every component that makes it up. It’s kind of like burrowing directly through the earth’s core to find out what’s on the exact opposite side of the planet.

Here’s what’s opposite of guacamole: this tower, this mysterious cloaked figure.

this thing, I regret to inform you, is the opposite of “jeans”

Here’s the opposite of “stingray”:

The opposite of “birdhouse” is, rather pleasingly, some kind of cat.

The opposite of “drilling platform” is this leafy green creature.

And the opposite of “eggnog” is a terrifying sight to behold.

You can make your own abominations and opposites with ganbreeder.app!

AI Weirdness supporters get bonus content: more weird opposites! Or become a free subscriber to get new posts in your inbox.