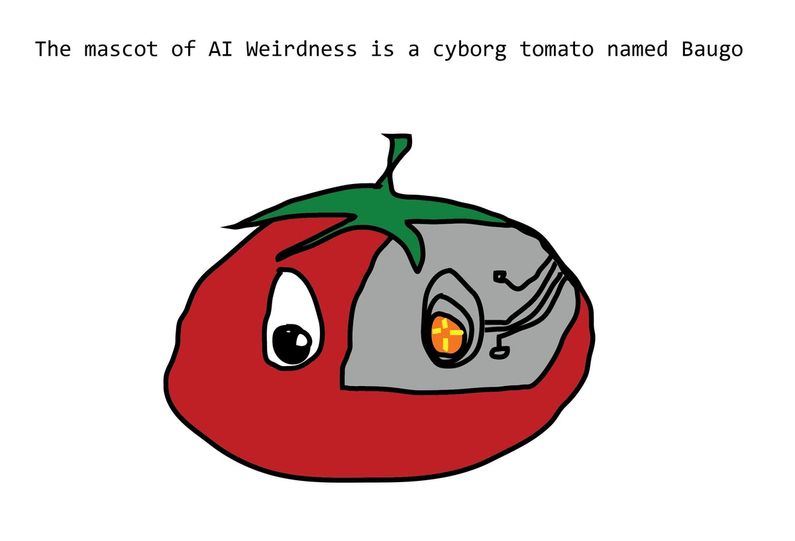 The mascot of AI Weirdness is a cyborg tomato?

Honestly wasn’t expecting GPT-3 to declare the mascot of AI Weirdness to be Baugo, a cyborg tomato. (To add to the weirdness, Baugo is apparently a township in Elkhart County, IN.)

Why is GPT-3 handing out mascots? I’ve been reading Mondo Mascots, which collects photos and short descriptions of Japan’s many, many mascots. The mascots, which promote anything from companies to towns to public service campaigns, can be extremely inventive. Some real Mondo Mascots entries:

Namisuke, a puppy-sized dinosaur-like fairy with a forest on his back, is the mascot of Tokyo’s Suginami Ward.

Yokazou, an elephant with a watering can head, is the mascot for Fukuoka City’s Chamber of Commerce.

Baron Ciste, a mascot from Hokkaido, Japan, is an ammonite-headed gentleman trickster who likes chess, riddles, opera, and fine wines.

With a few of these as prompts, I had GPT-3 add to the list. These costumes would be a challenge to sew.

Bister-kun is a scarecrow with a shark’s head for a nose and antlers on his head. He’s the mascot for the RIKEN Bistere team.

The mascot for Osaka’s Nara City is Nanbei-chan, a super-powered pickle with a pencil for an eye.

The Brando, a guesthouse in Tokyo, is represented by Garapon-kun, a shy yet terrifying Jack-in-the-box that likes to play with balloons.

Toritto, a baby angel-owl who swings around on a single leg with the grace of a ballerina, is the mascot for the town of Kanazawa, Japan.

Makuo, a sea anemone from Kagoshima, can see the future. His antennae are mittens, but he has eight toes on each hand.

Hotaru, a mascot from the Nakanogo town office in Yamanashi, is a giant firefly who’s also a detective.

ViRAT, a rabbit with energy beams for a tail, is the mascot for Tokyo’s Saitama Institute of Technology.

Its places and names are an interesting mix of the real, the apparently invented, and the quite possibly lifted from elsewhere. Its mascots, as far as I can guess, are unique.

I realized that Mondo Mascots’s descriptions follow a pattern that I might be able to make use of. So in front of each example mascot I entered a {place, name} or {company, company name} pair. Then with these as prompt, I let GPT-3 generate a few of its own entities, and mascots to go with them:

{place, G18}
GX70000000 is a gigantic space caterpillar shape unexpected and fascinating alien bizarre man animal thing. With a body composed of many sections, the complexity of the creature makes it hard to understand (many kids love GX though).

{company, Sunshine Co., Ltd.}
Queen Nango the cat, who quietly dwells in a seashell and is swimming in the sea of clouds, is the mascot of the karaoke equipment maker Sunshine.

{company, NTT DoCoMo}
Punkon Ton the rascally rabbit is a mascot for NTT DoCoMo. He specializes in ambushes. His hobbies are wire, keyholes, and holes in general.

I could use this format to generate mascots for whatever I want. Maybe for things that don’t already have mascots. After I found out that the mascot for AI Weirdness is apparently a cyborg tomato, I generated a mascot for “{concept, SARS-Cov-2 pandemic}:

Casty, a mascot from the fictional North Kanto district, is a bird-like creature that seeks peace and quiet, so he always wears a mask.

I’m particularly fond of the mascot for video conferencing:

On the mascot for video conferencing, blue Lepospondylus (a type of early reptile) has a camera for an eye.

Then to liven my place up a bit, I decided to have GPT-3 assign mascots to things around the house. Here’s what it wrote:

The mascots from my laptop: Desukan is a dog with a backpack and an itch for adventure, and the other is a berry with long black hair.

The mascot of my microwave is an egg that wears a gas mask.

The mascot of the crisper drawer of my refrigerator is a potato that likes to bathe in dripping water.

Yumeko, a mascot from my toaster, is a cupcake girl whose ears are her toaster’s toaster-wires.

And this is, um, what it generated for the mascot of my bedroom closet:

I am the man with the pocket in the head. My head is a pocket. I am the mascot of my own head.

The mascots above were all generated by the largest variant of GPT-3, called davinci. I also generated some mascots using ada, the smallest GPT-3 variant, and let me tell you, its mascots are wild.

Fujiwara-sama, a baby-crunch rabbit with a few purple tails embedded in its hoof, is the mascot for HP Pavilion’s blacked-out TRS-232 universal machine.

Dragonheart, the new mascot for Yog-Comics, is a giant tabby owl bat created as a transplant to dream history, filled with anger and desire.

To read a bunch more of ada’s mascots, become an AI Weirdness supporter. Or become a free subscriber to get new AI Weirdness posts in your inbox!

Bonus: Other ways to curse a candy heart